It was another volatile month in the markets with the All Ords rebounding strongly, posting a rise of 6.9%, its biggest monthly gain since November 2020. Whilst this was predominantly driven by surging resources prices, it was yet another example of the weight of money flowing into the stock market post short-term shocks and pullbacks.

The smaller end of the market did not perform nearly as well with retail investors, for the moment, waiting on the sidelines. The S&P/ASX Small Industrials Accumulation rose 3.0% with the Cyan C3G Fund posting a small gain of 0.3%. 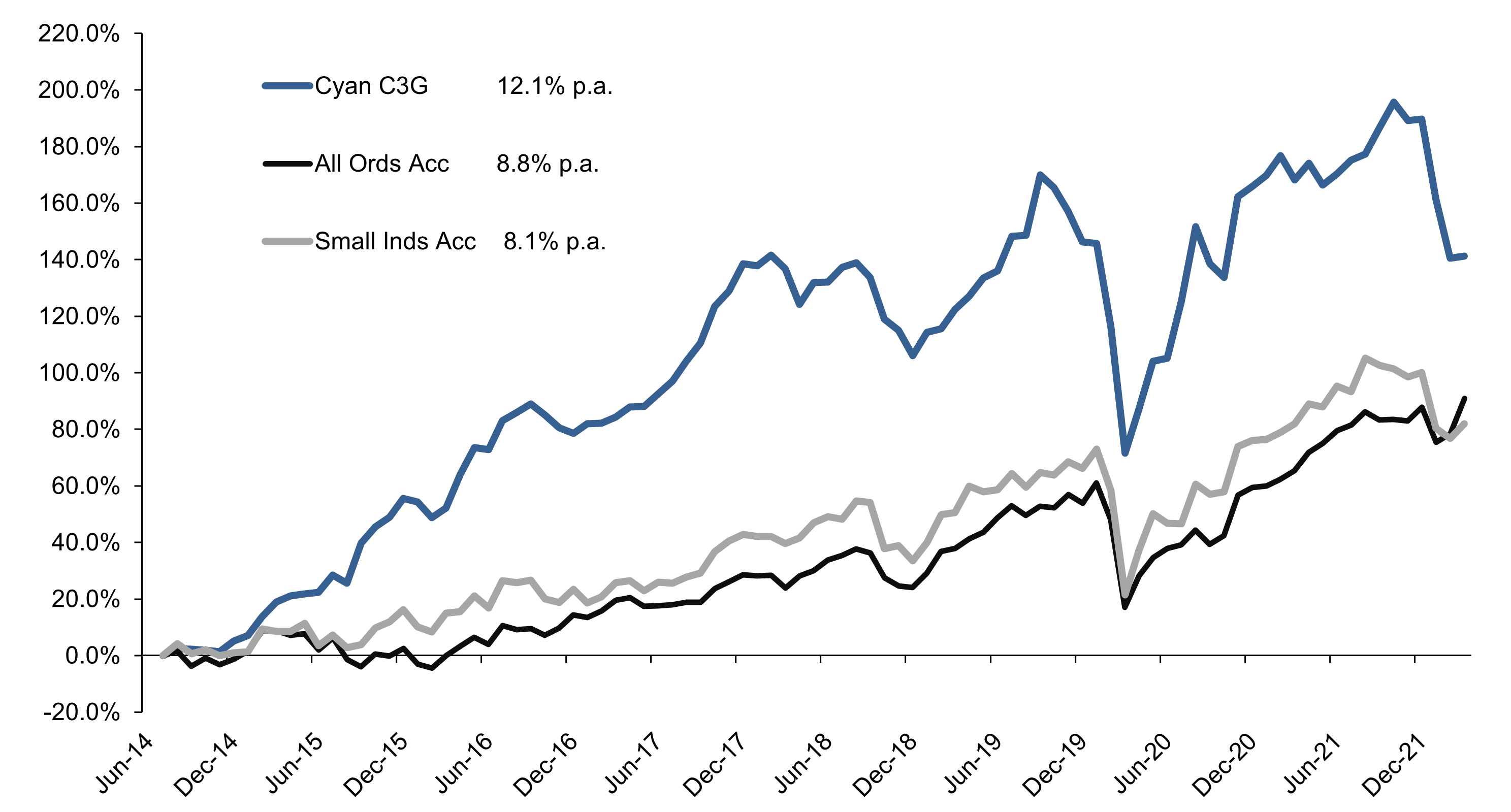 It was a mixed bag of performances in the Fund for the month although none of the major moves were driven by negative news.

The biggest driver of performance was the rebound in the price of delivery platform Zoom2U (Z2U +24%). We believe there is a step-change in customer expectations of delivery times with the likes of Amazon and the food delivery platforms offering next day, same day or 1 hour delivery windows. The delivery marketplace is well overdue to be disrupted with the incumbent, Australia Post, not being able to offer competitive delivery times, nor services such as driver tracking (due to union rules). Zoom2U is well established in this market with a proven commercial driver network and user deployed tracking software, and we expect the news-flow and positive financial results to continue for this exciting business.

Our small holding in Swift Networks (SW1 +29%), which provides media streaming solutions to mining camps and retirement living, rose nicely as a string of new contracts were announced including a $3.5m deal with Roy Hill Partnership and another $1.2m in contracts with Rio Tinto, Roy Hill, Strandline and Oz Minerals.

Quickstep Holdings (QHL +17%) was another long-term Fund holding that has begun to enjoy some market attention. QHL manufacturers composite parts for the F35 fighter jet and C130 bomber, provides commercial aerospace maintenance services and produces high end composite products for drone manufacturers. We conducted a field trip to their facilities in Melbourne during the month where the company reiterated the significant tailwinds in all three of their divisions. Indeed post the end of March, QHL has announced a milestone three year $30- 35m maintenance contract with Jetstar. We view this as both financially and strategically significant as Quickstep has dislodged offshore incumbents to bring the maintenance work to Australia.

Mighty Craft (MCL +0.0%) was unchanged in the month but probably made the most significant announcement when, on the 30th March, it upgraded its medium-term ambitions for beer production from 12m to 25m litres. MCL is having some phenomenal success with its Better Beer brand which is expected to sell 4m litres in FY22 despite only launching in November 2021. Along with MCL’s increased whisky production and a rebound in traffic to its eight hospitality venues, it is enjoying an outstanding recovery from the challenges of Covid. We currently see a real disconnect between the current share price and true value of the Might Craft group of assets and brands and expect as material re-rate when market conditions improve for emerging companies.

On the negative side of the ledger in March the Fund sustained falls in Raiz (RZI -14%), Touch Ventures (TVL -21%) and Maggie Beer (MBH -12%). In all instances there was nothing in the way of negative news released.

Dean Fergie was a guest on the “Rules of Investing” podcast with Patrick Poke of Livewire markets and discussed topics such as the ingredients for small cap success, is it easier to find alpha in small caps, what to do when the markets moving against you and Is now a good time to buy small caps?

Dean was also a guest on Ausbiz where he discussed whether small caps outperform in a rising rate environment and his confidence in Quickstep (QHL) which is seeing an uptick across all its divisions.

Whilst it was disappointing the Fund did not keep pace with the larger caps in March there was certainly much in the way of ‘green shoots’ for our portfolio holdings.

This month already we’ve seen a material positive announcement from Quickstep (as mentioned above) and Alcidion has made five separate announcements about material new contracts and contract renewal through their hospital network in the UK.

It’s natural to feel impatient or sceptical about the underlying progress our investee companies are making particularly when this is not being reflected in their short-term market prices.

However, we’ve been analysing and investing in small caps for almost three decades and know that there are periods of lulls and surges in the marketplace, especially at the smaller end of the market.

Given the underlying operational performances of our companies we genuinely feel there’s some ‘lag’ in their current prices and feel confident that there will be a near-term return to positive performance.

With travel opening up, we’ll be spending more time on the road, deep diving into our exciting company’s operations and looking for new opportunities.

As always if you would like more information about any aspect of your investment, please contact us directly.