The Cyan C3G Fund posted a 1.4% gain in June to round out the financial year with a solid return of 31.8%, after all fees, which compares favourably to the All Ords Accumulation Index return of 30.2% over the same period. 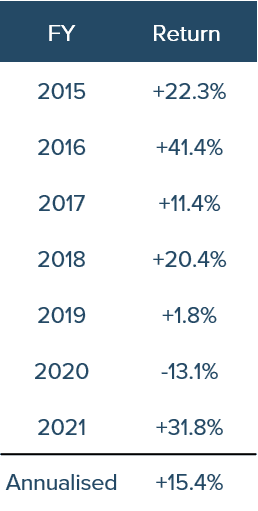 Over its history, the Fund has made a positive return in six out of its seven full financial years with an annualised return of over 15% p.a..

Whilst the market continued to power ahead in June, the COVID outbreak in a number of Australian states and the associated border closures did reshape investor outlooks. Travel and leisure stocks slipped and some renewed interest was sparked in the online retailers (Kogan, Adore Beauty, Marley Spoon, Jumbo Interactive) and the BNPL space (Afterpay, Sezzle and Zip).

There was also an abundance of corporate activity in both the IPO space (15 new listings in June) and the secondary placement market (in our sectors of focus alone we were pitched over 20 placements amounting to more than $300m in new capital) indicating continued investor appetite.

June can often be more volatile than other months, particularly at the smaller end of the market, with individual stocks either being adversely impacted by tax-loss selling or positively impacted by ‘window dressing’.

Our best performer in the month was accounting and financial services consolidator Kelly Partners Group (KPG +38%). We have been long-term investors in the business (since IPO in June 2017) and believe the stock has been fundamentally undervalued for some time. However we’re not entirely sure what has prompted the timing of this recent price spike other than some rumoured offshore buying. KPG has a solid business model in an extremely stable, non-discretionary industry and is one of the only ASX listed companies (to our knowledge at least) that pays a monthly dividend. In an era of almost zero interest rates, this is obviously an attractive investment feature that may well have helped support the recent price activity.

Micro-investing platform Raiz (RZI +16%) has been a bit of an underperformer since its $10m placement in May, despite significant growth in both FUM (almost $800m +76% yoy) and active customer numbers (456,000 +87% yoy). Therefore it was pleasing to see the stock rebound in the month. RZI no doubt gained additional exposure from its appearance in Ausbiz’s Small Caps, Big Ideas online conference which was held in late June.

Boutique craft beer and spirits company Mighty Craft (MCL +17%) announced a company transforming acquisition of The Adelaide Hills Group which will more than double the company’s revenue to $78m and boost its profitability to $6m EBITDA. The company raised $27m in new capital to help fund the purchase to which the Fund subscribed and which will settle in July.

Our unlisted investment in AP Ventures continues to expand its portfolio of investments with two further deals announced in June: the US$25m purchase of a 10% stake in parcel and courier service Sendle; and a US$5m investment of a 12% stake in Postpay, a BNPL player based in the UAE.

On the negative side of the ledger both of our online education holdings, Kip McGrath Education (-8%) and Readcloud (RCL -12%) slipped in the month. After many months of positive gains Alcidion (ALC -13%) gave back some ground and media streaming service Swift Networks (SW1 -25%) appeared to suffer from some serious tax-loss selling with the stock already having recovered these losses in the first week of July.

We spoke earlier about tax-loss selling and we believe Quickstep (QHL +16%) was a victim in May when it fell 23% but retraced much of this in June (and has continued into July) on account of new orders announced at the end of May. 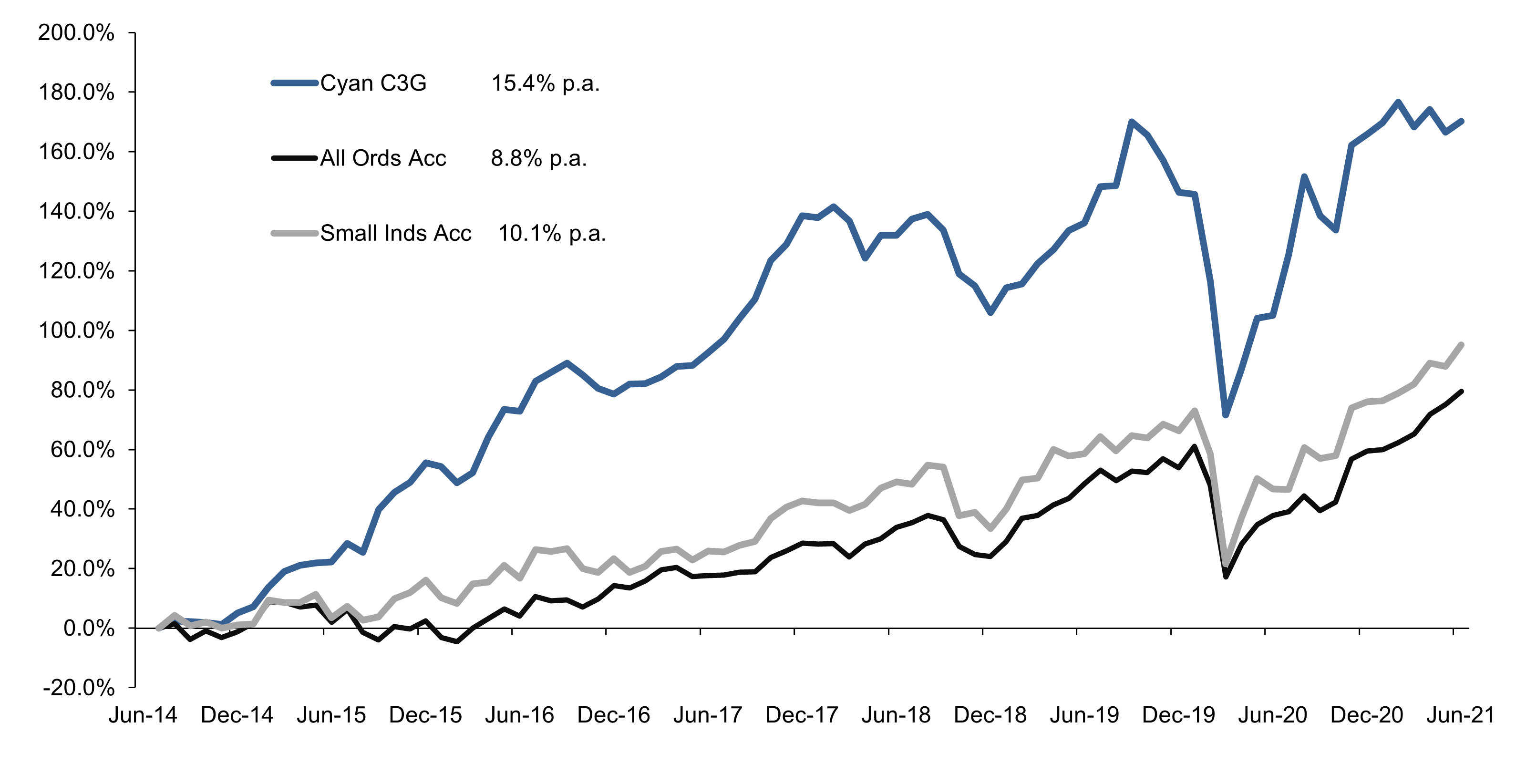 As mentioned above, Cyan present Raiz (RZI) as one of its top picks on AusBiz, Small Caps Big Ideas. Click below for the full video.

Cyan has also commented in the AFR, Why top fundies are looking past lockdowns, and appeared in Fund Monitors and other publications as detailed in the ‘News’ section of our website.

As discussed earlier, market activity in the new financial year has been strong and there appears to be no current signs that this will abate.

July has started well for the Fund with a number of positive announcements and some new deals that we expect will add additional value.

The Fund presently holds 23 listed positions and 4 unlisted investments which are all forecast to come to market before the end of the calendar year. Our cash balance is presently at 20% which should remain stable as, in the new financial year, we rotate out of some of our investments that have made significant capital gains and into new opportunities.

Whilst it is difficult to predict short-term Fund performance, we have every reason to remain optimistic about the new financial year.

As always, we encourage investors to contact us directly with any queries.