The Fund posted a positive result of 2.2% in April, behind the All Ords for the month but well ahead over one year.

The Australian market enjoyed continued strength as positive consumer confidence and low interest rates drove investments into asset classes outside of bonds and cash. However in an environment where macro factors and sentiment can change so quickly, some of that optimism began to shrink in the wake of India’s concerning Covid outbreak.

We continued to see heightened levels of corporate activity and, as a result, we participated in both primary and secondary market capital raisings in companies including Raiz (RZI), Alcidion (ALC) and Maggie Beer (MBH).

There was significant dispersion in individual Fund stock returns over April which mirrored much of the broader market.

At the same time performance was held back by double digit declines in: Playside (PLY), Readcloud (RCL), Singular Health (SHG), New Zealand Coastal (NZS) and Zebit (ZBL).  Of course, outside of returns, Fund weightings are of critical importance to overall performance and thus our larger holdings did better than the less significant positions which accounted for the overall positive monthly return.

Without exception, the positions in our Fund that declined in the month did not report any specific negative news about their operations or outlooks. As such we would be correct to believe that there has been larger fund rotation out of some of these less liquid names (and hence why we have smaller Fund position sizes) driving the prices lower in the short-term. Indeed there have been some stocks that we own that have reported material large shareholder changes.

We feel like we mention Alcidion (ALC +31%) most months but that’s because the company’s news-flow is regular, positive and material. This month ALC announced the acquisition of Extramed, a UK based patient tracking software provider and concurrently raised $18m in new shareholder capital, to which the Fund subscribed. Added to this was the announcement of a potential $21m Department of Defence contract, hence it is easy to see why the stock price continues to track so strongly.

Universal Biosensors (UBI +41%) continued to trade up strongly. The recent performance was fueled by the announcement of an international license and supply agreement with US-based Lubris BioPharma to use UBI’s technology to screen for cancer. To recap what we wrote last month:

“We took our initial position in UBI in August last year. The company focuses on the development, manufacture and commercialisation of point-of-use devices for measuring chemicals. After years of R&D and a couple of onerous old contracts, new management has reinvigorated the business and secured new contract agreements in the wine industry, vet industry and in early cancer detection. John Sharman of Medical Developments (MVP) is now at the helm and appears to be steering the company towards a very exciting future.”

The markets, both in Australia and the US, are wrestling with the growth versus value puzzle. This has resulted in volatility and weakness in some specific sectors that had performed particularly strongly throughout a Covid-impacted 2020 – most notably technology and consumer discretionary companies. For example, Kogan (KGN), Afterpay (APT), Adore Beauty(ABY) and Appen (APX) have all fallen somewhere between 30% and 75% from their previous share price highs.

This illustrates just how quickly the current investment environment can change and the critical ongoing need for portfolio diversification. As such, we continue to own growth-focused investments, but with exposure to a wide-range of discreet industries that comprise businesses at varying points of their lifecycle. The Fund is presently invested across 26 companies with a market cap range of $15m to $1bn.

The chart below shows our current portfolio composition by industry sector. 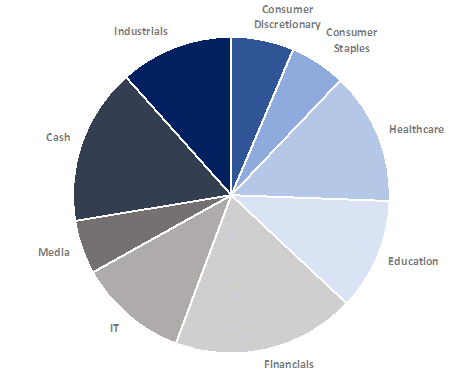 At we stated last month:

“In the coming months we expect some good news from our already-committed pipeline of IPO and pre-IPO positions in companies such as the Afterpay-backed venture capital company AP Ventures and influencer marketing platform Tribe”.

We also look forward to some announcement-driven catalysts in our portfolio of existing listed companies in the form of new contract wins and strong earnings performances.

As always, we thank our investors for their ongoing support and look forward to communicating our performance over the coming months.