The Fund posted its sixth successive positive monthly return with a modest +1.1% gain to round out the first half return of 2019 to +14.6% (after all fees).

Whilst we don’t specifically target any indices, it should be noted that the Fund’s return this year is presently behind both the Small Industrials and the All Ordinaries which have swept away +19% and +20% respectively; much of this failure to keep pace has been due to our conservative ~30% cash weighting. Regardless, our long-term returns since inception (at 19% p.a.) are almost double those index returns over the same timeframe.

It appears that the two RBA rate cuts in the past month – the first change in official monetary policy since August 2016 – have seen money flood into the equity market. It’s quite rational: cash rates (at 1%) are now 33% lower than they were on 8th May 2019 and 3 year bond rates this year have more than halved from 1.9% to just 0.9%. Hence the relative attractiveness of the equity market, in this historically low interest rate environment, is clear. 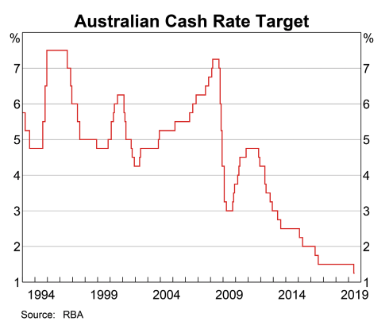 There were a couple of notable wins this month that helped drive the Fund higher.

Our IPO investment in co-working space provider Victory Offices (VOL) www.victoryoffices.com.au listed at a validating 10% premium and we have since added to our initial position. We firmly believe Victory is an attractive investment proposition as co-working spaces are booming globally. Just witness the massive expansion of the US-based WeWork www.wework.com that boasts over 500 locations and a valuation north of $40bn. Of course we do everything smaller in Australia; VOL has just 20 locations and a value of $92m. But with their footprint expected the rise 50% to 30 locations over the next 12 months, there is some serious opportunity for both earnings and valuation growth.

Somewhat surprisingly Kelly Partners (KPG) was our best performer this month, rising almost 25%. Granted, the stock has been trading at half the price it was 12 months prior, but KPG does look inexpensive (its prospective PE is only 10x) and the quarterly dividend of 1.1c also makes the stock look attractive with a fully franked yield of 4.5%. The company obviously agrees, with its active share buy-back no doubt helping support the share-price.

The other win we had this month was the revaluation of some escrowed Atomos (AMS) shares we purchased back in March (at 60c) that were able to be revalued in June. AMS closed at $1.03 but has traded higher again in July having just raised $7.5m in new capital and completed a sell-down.

We think the 18/19 financial year can be described as either a rollercoaster or a tale of two halves.

It’s not unfair to say the first half (to December 18) was a bit of a shocker. A nasty combination of some poor stock choices combined with a bearish market resulted in the Fund retracing almost 12% in 6 months, worse than the 7% fall in the All Ords and about in-line with the Small Industrials. Long-term Fund holdings such as AxsessToday (AXL), Experience Co (EXP), Motorcycle Holdings (MTO) and Kelly Partners (KPG) all suffered serious losses on account of earnings downgrades or simply company mismanagement. It was a tough period.

However 2019 has tracked almost as well as we could have hoped. New Fund holdings including Alcidion (ALC), Atomos (AMS), Audinate (AD8), Quickstep (QHL) and Victory (VOL) have all proved extremely profitable additions whilst we have concurrently enjoyed material gains in Afterpay (APT), AMA Group (AMA) and Spicers Paper (SRS). The overall Fund rebound of 14% in the second half of 2019 has resulted in a modest 1 year return of 1.8%. Definitely not a return we can be overly proud of, but we are certainly happier than we were at the end of 2018 and we’re pleased to report the momentum, thus far, has been maintained into the start of FY20. 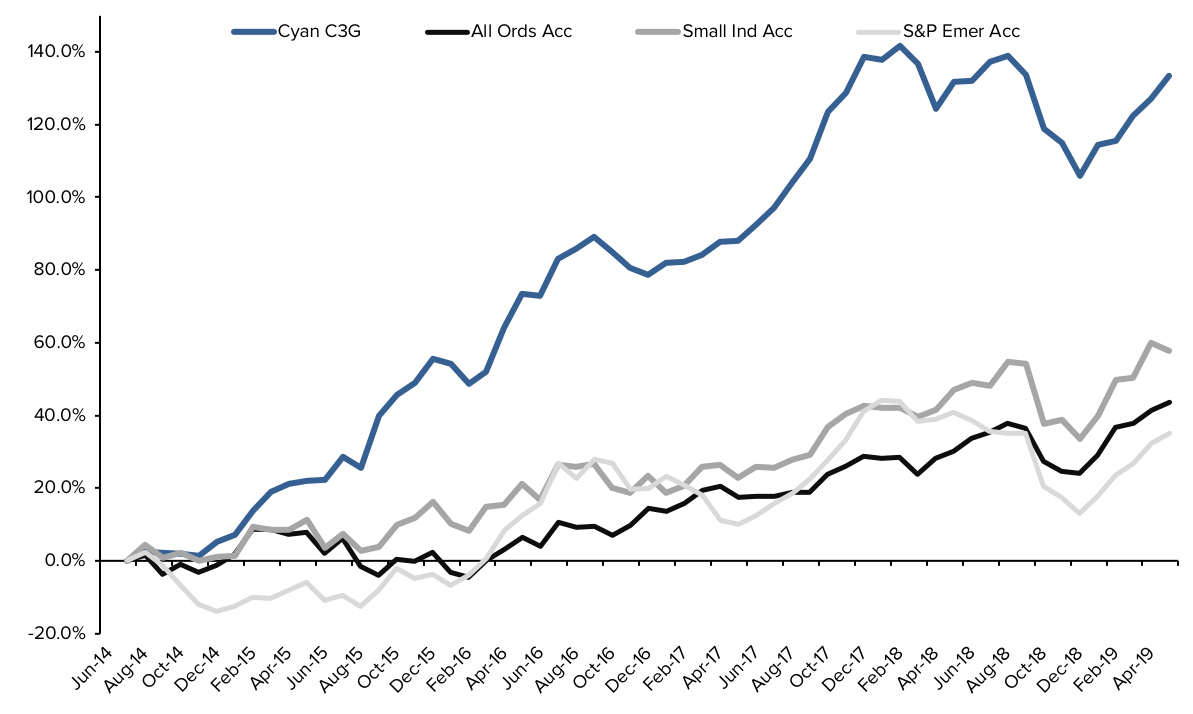 Please refer to the ‘News’ section of our website for links to articles this past month featuring Cyan in the AFR, Fund Monitors, Livewire and Stockhead.

We don’t think it’s unreasonable to suggest that nearly every market commentator or participant has been blindsided by the incredible strength in both the ASX and, indeed, global stock markets this calendar year.

The ASX is has had its strongest first 6 months since 1992, no doubt encouraged by the surprise federal election result and boosted by the two recent rate cuts that are driving yield curves significantly lower (the 10 year bond rate has halved from 2.5% to 1.25% in the past 6 months).

Activity in our space remains high. The Fund has subscribed to a number of smaller placements but has also taken stock in a handful of new IPO’s due to list in the coming months.

Nevertheless we’re also conscious that the market doesn’t rise indefinitely and we remain wary about some extreme valuations, particularly in the tech space. We have lightened our position in Afterpay this month (being reluctant to realise large capital gains in the 18/19 tax year) and are vigilantly managing our other holdings whilst also looking carefully at new opportunities such as:

Quickfee (QFE): https://www.quickfee.com.au/ offers premium funding and payment solutions to the accounting and legal industries in both Australia and the United States. Quickfee is raising $14m at a (post-money) market cap of $28m. Whilst not yet profitable, after having met with Quickfee management in Melbourne and visiting their US office in LA, we believe their compelling offer and scalable business model could be very successful over the longer-term.

Whilst month-to-month volatility can be expected, we have a firm view of long-term opportunity and remain confident in the outlook for the Fund into the future.

As always we are contactable in person and encourage you to do so if you have any questions for us.