The Cyan C3G Fund reported a small gain of 0.7% in August, moderately behind the 1.7% return of the All Ords Accum.

For us, it was a frustrating outcome as we had a number of positive company results that were negated by some falls late in the month, which we will discuss below. Nevertheless, it is worth keeping in mind the longer-term context with which any equity investment should be viewed and, in this respect, the 12 month return for the Cyan C3G Fund remains a credible 17% after all fees with longer term returns above 20% p.a. 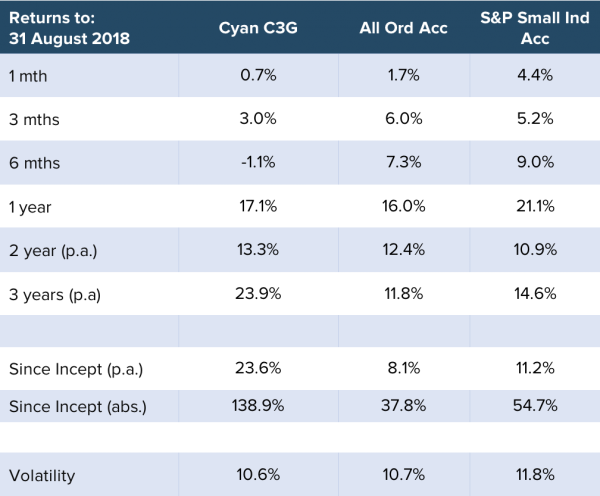 The Fund experienced unseen individual stock volatility during August, with reporting season’s results exacerbating underlying trading trends. There has been a growing dichotomy between ‘growth’ and ‘value’ stocks with a cohort of large ‘growth’ companies capturing market mania. These included companies such as Appen, Afterpay, Altium, Bravura, Webjet, and Wisetech which all rose between 25% and 40% in August alone.

Regular readers will be aware of our investment in Afterpay (APT) which was clearly of significant benefit to the Fund in August. Cyan met with Afterpay in San Francisco in mid-August and gained a meaningful understanding of the extraordinary potential of their expansion into the US. This initial beachhead will be further supported with the company’s recent raising of $117m to fund further expansion into both the US and UK. APT rose 28% in August.

The other notable investee company we caught up with in the US was the Fremont, CA based Pivotal Systems (PVS). PVS provides gas flow controllers for semiconductor manufacturers and back in June we wrote:

“Pivotal’s attractive market position and growing revenues of US$30m in FY18 up from US$8m in FY16 certainly provide an attractive entry point and we expect there will be a pipeline of positive news flow.”.

The other major positive contributor was Acrow Formwork (ACF), which gained more that 50% in the month and has risen over 150% since our investment at IPO in March 2018. A strong FY18 result was boosted by the company’s $15m acquisition of formwork competitor, Natform. As we wrote last month:

“This emerging construction and civil services business is also beginning to lift its profile in the market as it positions to capitalise on government led infrastructure spending on Australia’s east coast. We expect the company to deliver short-term earnings growth and secure a new pipeline of contracts in its niche industry.”.

Ok, so the negative news.

Experience Co (EXP) -27% in August came out with what can only be described as a poor result with profitability impacted by the first annual fall in skydiving numbers in a decade, a run of poor weather in QLD and some one-off items such as aircraft revaluations. We can be thankful of two things: 1) EXP has diversified their business away from purely domestic skydiving diving and the performance of their acquired adventure tourism assets and NZ operations has been solid and; 2) our prior weighting of EXP has been diluted over the past 6 months as the Fund has grown and no additional EXP stock has been purchased. As such, the impact on performance was -0.7%.

Axsess Today (AXL) -20% was the biggest drag on performance in August. Despite reporting an FY18 NPAT result of $7m (up 94% y.o.y.) and forecasting this to improve to $12.5-$13m in FY19, investors took a cane to the stock due to a change in its arrears recognition policy, which, on the face of it, appeared like bad debts might be increasing. With any lending business, the market tends to take a ‘shoot first, ask questions later’ approach and this has certainly been the case with AXL. We have been in deep discussions with the company and expect, with increased clarity in the coming weeks, the stock to rebound in the near-term.

Close followers of the market, particularly at the smaller end, will be aware of the bullish run it has experienced over the past quarter. It’s been frustrating that we have not benefitted from this as much as we could have, given we have retained a conservative balance in cash. However, to date in September, much of this sentiment has reversed and our cash has buffered us from the recent falls.

Many (but certainly not all) of the companies in our Fund are high-growth (with higher PEs) that can be expected to experience higher monthly volatility than more benign (and lower growth) business models. We will endeavour to smooth this out through intra-month re-weightings but there will, inevitably, be periods in which these companies will not perform as we expect in the shorter-term due to market fluctuations. Where this is often alleviated, is through a prudently diversified portfolio of companies that make up the Cyan C3G Fund. The small rise in the value of the Fund this month in light of many extreme price movements (more than half the stocks in the Fund moved by more than 10% in the month) bears this out.

It’s hard to know exactly how the market is likely to perform in coming months. With such uncertainty, we find it valuable to look a year ahead and forecast, operationally, how the businesses in which we have invested might be performing in 12 months time. In every business in which we have invested, we see them growing strongly in the coming year and being significantly more valuable businesses than they are today. With those expectations, it is easy to have long-term confidence in our current investment decisions.