With a poor return of -5.3% in the month, we’re unhappy to report that April 2018 has been the C3G Fund’s most disappointing month yet. Whilst of lesser consolation to recent investors, this negative return has come after a sustained period of outperformance with the 12mth return of the Fund in excess of 19% (after all fees).

Even with an underlying market that was positive, the Fund struggled to find a position that rose in April. It was a true ‘perfect storm’ as prices across the Fund pulled back. Despite only BlueSky (BLA) and Experience Co (EXP) posting negative news, just three stocks out of a portfolio of more than 20 rose (and, even then, those three gains were all less than 5%).

This is certainly disappointing news for our investors (including ourselves as fellow Fund unit-holders) and one that we hope we will be a rare occurrence. 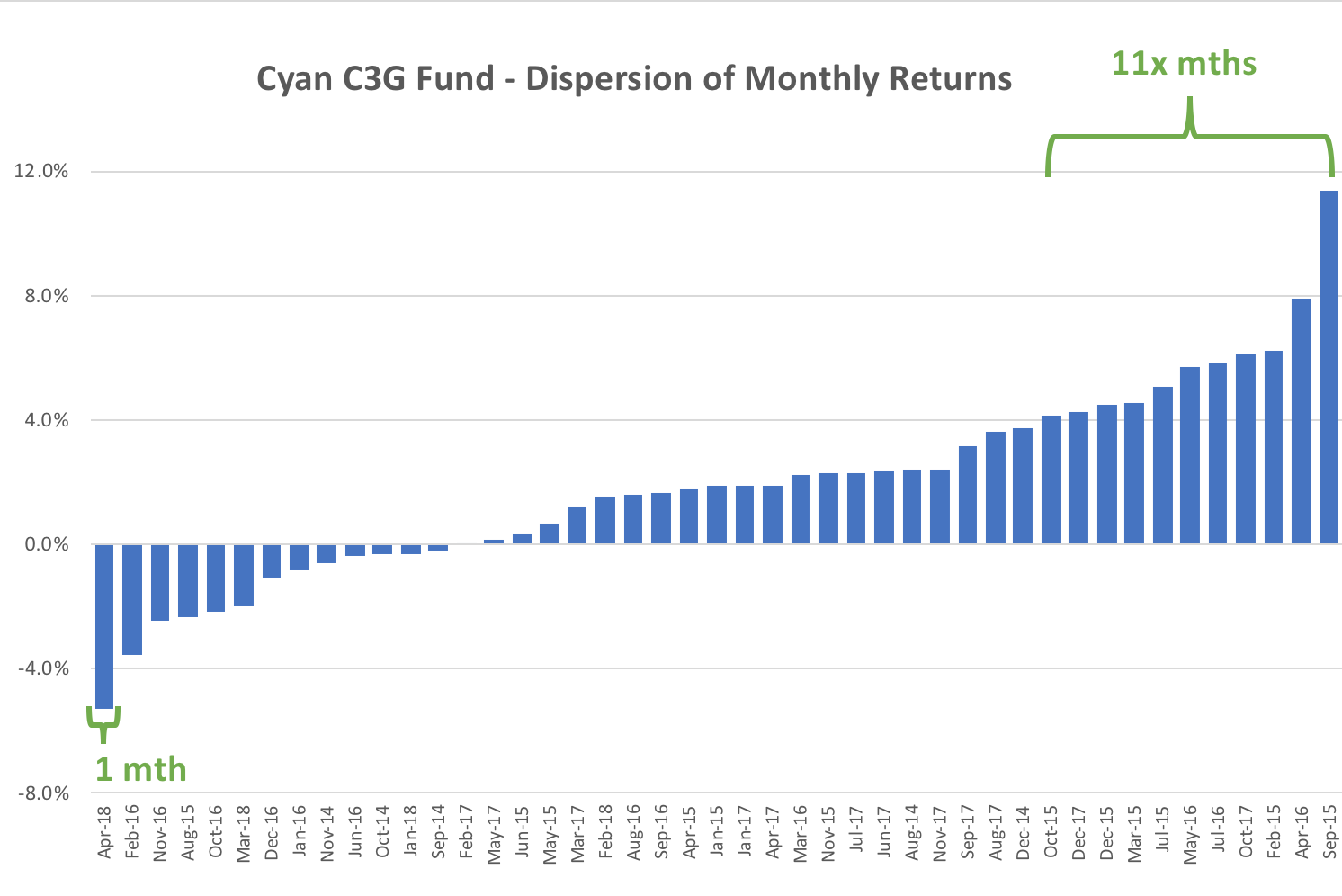 We pride ourselves on our ability to discover and profit from strongly performing companies that are yet to be recognised by the broader market. And we aim to do this whilst limiting the overall risk of our investors’ capital. Compared to the market, the Cyan C3G Fund has fallen fewer months than the market, and when the Fund does fall, it falls less, on average, than the market.

We believe that, rather than focussing on individual months – and whether it has been a good or a bad time to invest -investors should consider their investment over a longer-term timeframe. Throughout an expected 3 year investment period, this will comprise of 36 months in which, hopefully, many will be positive and some will be negative.

How these fall is, in some respects, likely to be random and any short-term moves should be seen in the greater context of a longer term investment.

April’s negative performance was bookended by two longer-term positions that have added significant value to the Fund over their lifespan. BlueSky (BLA), which we wrote about extensively in our last monthly report in early April here, impacted performance at the start of the month and Experience Co (EXP), which downgraded earnings on the 30th April, impacted at the end.

Some of the more notable positions included:

AMA proposed a demerger to shareholders after receiving a takeover bid from Blackstone for its Vehicle Panel repair business equating to 86cps. The extended timetable and attractiveness of the remaining Automotive Components business has clearly not been well received as positively by shareholders as we might have expected. With the shares closing the month at 97c there appears to be significantly more upside than down.

The company revised its FY18 earnings guidance down by 15% on the 30th April because of some extreme weather in Queensland – some areas received more than 1,000mm of rain in March. We were aware of the less than favourable weather but regard it as an ‘external event’ – much like accidents, that the company has also endured – and not a fundamental change in the underlying fundamentals of the business. Indeed, the ensuing weakness has provided a short-term value event and we have picked up a handful of additional shares in the company.

The recent performance of this company has been somewhat confounding. Despite rolling out new stores and making a smart vertically integrated acquisition in parts wholesaler, Cassons, MTO has found itself under severe price pressure. Motorcycle sales have been softer but the longer-term outlook of further consolidation in the industry looks likely. Over the past three months we have reduced our weighting in the stock but the pullback has still impacted performance. As yet, we have not sought to again increase our holding but at current prices, this is a company that is rapidly becoming an extremely attractive long-term proposition.

We can only be put down the recent weakness in this Sydney based investment bank to the negative commentary swirling from the Financial Services Royal Commission. There are a number of catalysts in the coming months that could see this stock track significantly higher.

Cyan Investment Management was mentioned as one of the stand-out managers in the Livewire article: “Microcap Managers continue to outperform ETF’s”.

Graeme Carson was interviewed by Livewire, “Focus on the company, not the index.”.

Being long-term investors it is difficult to manage month-to-month performance.

Indeed – with the definitive caveat that any short-term movements are not a reflection of deteriorating structural investment fundamentals – we believe it is detrimental to long-term investor returns to concentrate on shorter-term price movement.

Of course when companies disappoint we will not hesitate in cutting them (BlueSky is presently trading 60% below where we completed our selling in early April), but there will be occasions (hopefully few and far between) where there are simply fall-backs in price.

In light of recent price movements, we are looking on the near-term outlook for the Fund more positively than in the past. Certainly some short-term pain has been experienced but we are beginning to feel there is some value creeping into our end of the market. We’ll likely add to many of our our existing holdings in the coming months and, as always, be hunting out new and exciting core Fund positions.

As always – and particularly given the recent disappointing performance – we are available to be contacted by our investors directly at any time.