Challenging market conditions in March saw the Cyan C3G Fund fall 2.0% (after all fees), less than the overall market.

The US again led the weakness (the Dow Jones fell 3.7%, following a 4.3% fall in February) on the back of events such as the proposed Chinese trade tariffs, the US Fed rate hike and the alleged data breaches at Facebook.

In sympathy, the All Ords Index tumbled 3.5%, its worst monthly performance since January 2016.

Despite this negative month, the longer-term record of the Fund remains outstanding. 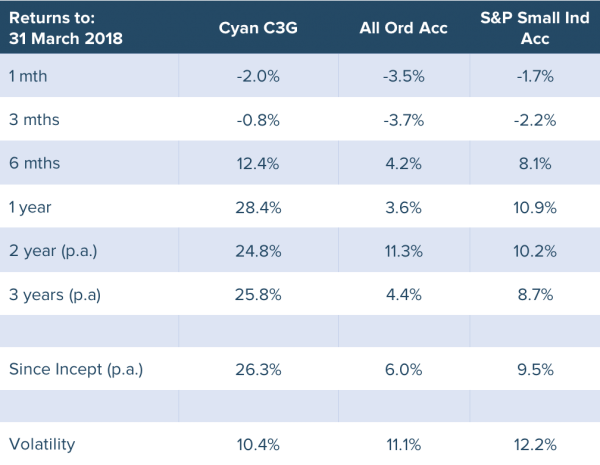 Whilst the Fund’s defensive cash position did alleviate some of the market weakness, the Fund did struggle through what proved to be a tough month for all market participants.

The one clear positive was that the Fund’s biggest holding, equipment financier Axsess Today (AXL), rose 8% after announcing it would establish a $200m securitisation warehouse, facilitating further growth and significantly reducing the company’s ongoing funding costs.

In-line with the broader market, a number of the Fund’s share prices declined. These included AMA Group (AMA), Afterpay Touch (APT), Motorcycle Holdings (MTO), Experience Co (EXP) and Moelis (MOE) which pulled back between 5 and 10%. However the most material negative contributor was BlueSky Alternatives (BLA) which has been particularly newsworthy of late and we discuss our position in detail below.

The C3G Fund portfolio is currently defensively positioned with a substantial cash holding complemented by 20 positions. We look forward to deploying further cash as opportunities are identified but remain acutely aware of inconsistent sentiment and patches of extreme volatility that the market is currently experiencing, particularly at the smaller end. That said, we have identified a number of growth opportunities and look forward to investing with a long-term view when we deem appropriate.

Readers might well be aware of the challenges one of our long-term holdings, alternative asset manager Blue Sky (BLA), has faced since Glaucus, a US based short seller, released a scathingly negative report on the business at the end of March with the company entering into a trading halt over Easter to respond.

Broadly, the report opined that the carrying value of assets in BLA’s underlying funds have been overvalued, flowing through to an over-reporting of the company’s asset under management (AUM) which dictate, almost fully, the company’s ongoing fee revenue. In its response, the BLA Board described the report as “incorrect, fundamentally flawed and materially misleading”.

The Cyan C3G Fund made its first investment in BLA back in October 2014, at just $2.80. Since that date, the company reported an enviable set of financial results reflecting a strong and growing business. In FY15, 16 and 17 respectively, the company announced assets under management (AUM) of $1.4bn, $2.1bn and $3.3bn; underlying earnings after tax of $10.4m, $16.3m, and $25m; and paid three fully franked shareholder dividends of 11c, 16c and 23c.

We had engaged with management and staff on more than a dozen occasions through company presentations, investor briefings, product launches, phone hook-ups, along with attending their two day annual investor conference in Brisbane. In addition, we had visited and talked directly with many of their underlying investments. Whilst we will never know everything about a business, we felt that we had a good understanding of the company and we believed in the integrity of the people involved.

As the company proved itself, the Cyan C3G Fund increased its initial position, which added significant value to the Fund as the share price rose. As always, this was managed dynamically and, over the holding period, we adjusted our position more than 10 times. At the time of the Glaucus report being released, BLA was less than 4% of the Fund, less than we had held in the past, but not insignificant. Up until this time, we had no reason to doubt the success of the company. Indeed, none of this negative speculation has yet been proven correct.

However – and this is a big however – we are acutely sensitive to market sentiment and how this can seriously impact stock price movements. There has been no fundamental change to the underlying business in this short space of time, and our opinion on the short-seller research report is not particularly important, because the reality is that the investment thesis has changed due to perception around the company and the market in which it trades.

Thus when the market for BLA’s securities reopened on 4th April, we sold a significant stake immediately (above $8), and continued to sell during the day. Shortly thereafter we had sold our position completely. The price sell-off was dramatic, with BLA falling from $11.50 to as low as $4.50 in 3 trading days.

This is one of the major advantages of limiting the size of the C3G Fund, being able to exit a position when required. Because of our definitive move and manageable fund size, the impact on the Fund of the severe sell-off in BLA has been limited.

To be clear: we will never be able to buy into a stock at the very bottom and sell out at the very top. 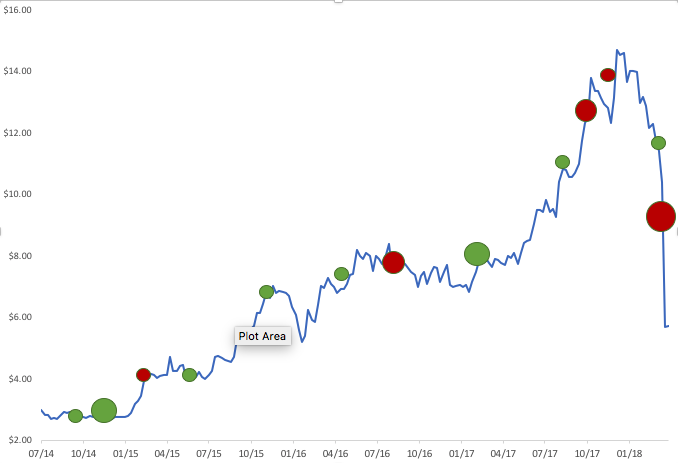 We endeavour to discover attractive businesses before the rest of the market and manage the weighting of those positions appropriately as the fundamentals change, new information is released and stock prices move.

Importantly, if significantly negative information is released, we take immediate and decisive action.

Along with finding attractive investments, this is another situation in which we believe we add value – to be vigilantly watching investments and acting definitively when required.

Because we got in early and managed our holding prudently, our investment in BLA added over 12% to the value of the Cyan C3G Fund over its investment lifespan.

We will get things wrong again.

But if we get our good decisions very right, and limit the impact of our bad decisions, we will always end up well in front.

We believe our history with Blue Sky (and Bellamy’s, GetSwift, M2 Telecommunications and Vita Group) has proved this.

As always, we are available to be contacted by our investors at any time.