The Cyan C3G Fund closed out the financial year on a strong note, rising 2.4% in June and taking the return for the year to 11.4% (after all fees).

Medical imaging services provider, Capitol Health (CAJ) www.capitolhealth.com.au had a brilliant month, booking a 38% gain. The company has a new management team and recently raised some $38m in capital to pay down debt. The catalyst for the strong performance was the sale of its troubled NSW assets for $81.5m – while guiding earnings to the top-end of prior ranges – allowing the company flexibility with its balance sheet and enabling management to re-focus on their strategic Victorian assets.

One of our newer holdings, MSL Solutions (MPW) http://mpowermsl.com/, rose 34% in June. The company has been somewhat ignored since it floated in May but it appears their growth prospects are beginning to be recognised by the broader market. This is another example of the benefits of investing ‘ahead of the curve’ rather than ‘with the herd’.

Blue Sky (BLA) http://www.blueskyfunds.com.au/ hit new highs in June of $9.60 as its FUM trajectory continued, pushing through $3bn in the month thanks to new institutional mandate wins.

The IPO of Kelly Group (KPG) https://kellypartners.com.au/, a Sydney based consolidator of smaller accounting firms, made a sound market debut almost 30% above its $1.00 issue price. Despite this gain we added to our initial position and the company has subsequently continued its rise, ending the month at $1.42, providing a healthy gain for the Fund’s investors.

The were a handful of positions that fell slightly including Nick Scali (NCK), Sensera (SE1), Freelancer (FLN) and AxsessToday (AXL), but not significantly enough to materially impact the overall return of the Fund.

Cyan was again featured in one of Livewire’s Buy Hold Sell pieces.
https://www.livewiremarkets.com/wires/buy-hold-sell-shopping-in-unlikely-places

Overall we were pleased generating a return to our investors of 11.4% (after all fees) in FY16/17. Again this return was in excess of our comparable smaller cap equity indices and was achieved by taking lower market risk through some allocation to defensive cash weightings over the period.

Some Fund statistics for the year: 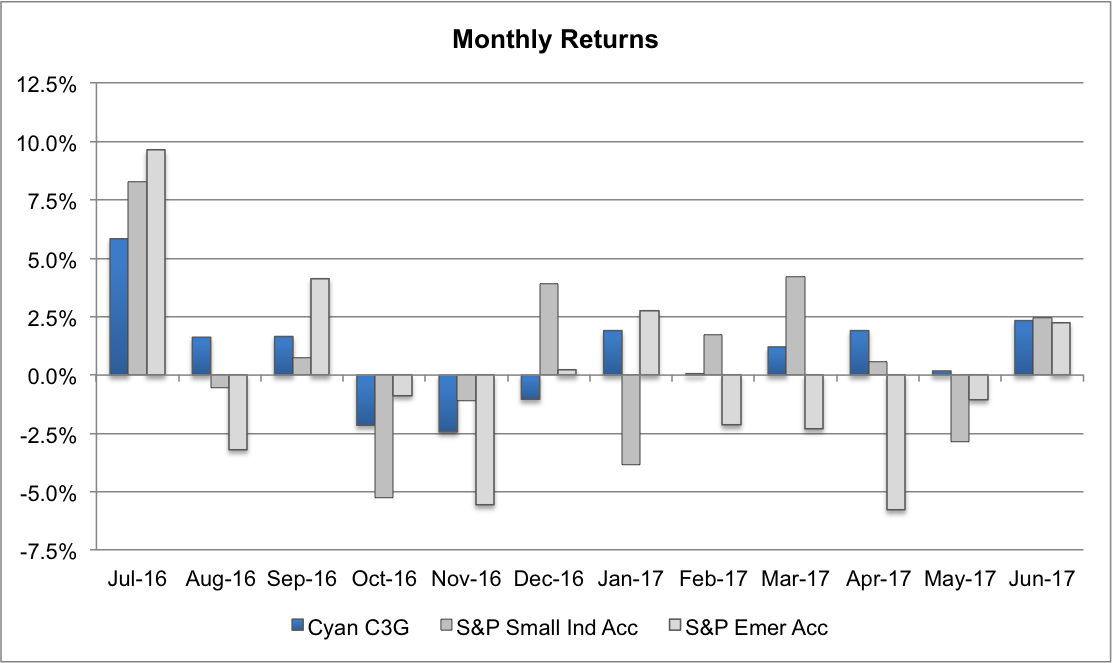 As always there were both positive and negative Fund contributors over the 12 months.

Vita Group (VTG) accounted for around a 1% decline in the value of the Fund over the year after it became evident Telstra was likely to tighten up its commission share with VTG. As we are investors that do not ‘sit tight’ when new corporate challenges emerge, we sold our holding completely at around $3. (Historically we had initially purchased VTG at $0.92 although at 30 June 2016 VTG was trading at $4.11). With VTG shares currently fetching around $1 our decision to exit, to date, has been the correct one.

Obviously with an 11.4% return for the year we had a lot more good news than bad.

Our holding in Afterpay (AFY) https://www.afterpay.com.au/ was up almost 90% as the company continues to grow customers, merchants and revenues at an extraordinary rate. AFY now processes annualised revenues of more than $1bn for 700,000 customers through 4,000 merchants, is likely to have been profitable in the first half in 2017 and is set to gain additional margin improvement post its merger with Touch Corp. The new business is now known as Afterpay Touch (APT).

Skydive the Beach (SKB) https://www.skydive.com.au/ rose 30% during the year after making two EPS accretive acquisitions in the Cairns based Reef Magic Cruises and Raging Thunder Adventures. With SKB now capitalised at more than $280m (after being a $60 minnow at IPO) we believe this is a company that, in the coming year, will being to feature in many larger fund’s portfolios.

Our small holding in delivery software provider GetSwift (GSW) http://www.getswift.co/ rose 350% from its IPO price in December 2016. Whilst, at the time of listing, we thought the sector thematic was attractive, inconsistencies in management rhetoric, growing competition, lack of commercialisation traction and (recently) extreme valuation concerns (a fully diluted market cap of $180m, versus revenues of $54k in the first quarter of 2017) have led us to take our profits in GSW in the new financial year.

We have been fielding the inevitable question of “What do you think the next year will hold?”. If we had not been doing this for 20+ years we would probably be cavalier enough to give a considered and persuasive response.

The uncomfortable reality is that nobody really has any insight as to how the market (as a whole) is going to perform. There are simply too many moving parts; from interest rates to commodity prices, geo-political factors, investor confidence, management performance, regulation; and the performance of alternative investments such as real-estate, international shares and bonds to make even the wildest guess.

However, what we can confidently say, with respect to the Cyan C3G Fund, is that we have compelling expectations for all the companies in which we have invested the Fund. As a whole we confidently expect these businesses to grow materially in the next year.

Of course we will get things wrong, expectations may not always be met (but as often again, they may also be significantly exceeded). Much of our outperformance is due to our strict risk framework and decisive action with respect to underperforming businesses.

Conversely, significant gains are never generated by holding companies over the short-term; many of our core holdings have been held in excess of 18 months, generating strong and attractive after-tax returns for inventors.

The longer-term track record of the Fund remains outstanding. Over the past three years the C3G Fund has provided investors with returns of 25% p.a. and has achieved this with lower volatility (risk) than comparable indices.

We thank investors for your support and look forward to keeping you updated with the Fund’s ongoing progress.