We are somewhat disappointed to report that the Fund posted a small fall in December, retracing 1.0%. Much of this was due to our small position in Bellamy’s that we will expand upon later.

To most investors’ surprise, the market has posted strong gains since the Trump victory in the US election. The broader market in Australia has risen almost 9% since the unexpected result. Bearing in mind that All Ordinaries is heavily weighted (almost 40%) to the banking and the financial sectors, much of the All Ords’ performance is linked to the 4 banks (ANZ, CBA, NAB, WBC) that have all risen between 10% and 20%.

Interestingly, like many prior ‘doomsday events’ (Greek Exit, Brexit, US Election), the initial fear of the outcome has far exceeded the reality of the event with the markets (again) experiencing a material ‘relief rally’. The major loser however has been the bond sector with rates of longer-term securities spiking to 12 month highs since October. 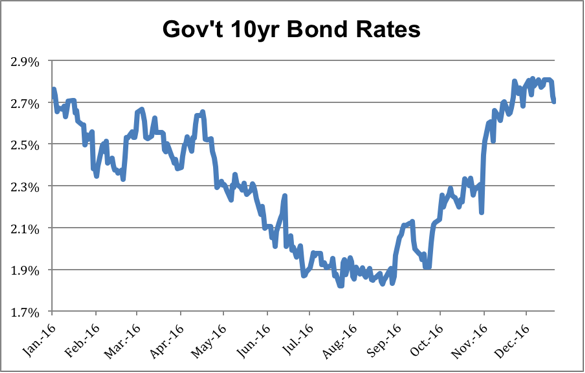 The negative Fund result in the month was primarily due to our position in Bellamys (BAL). As we reported last month:

“Close followers of Cyan and the stock market would likely be aware of the shock downgrade by Bellamy’s (BAL) early in December, citing lower than expected sales to China. Cyan took immediate action and sold its holding… Whilst less than ideal, BAL is presently trading $2 below where we conducted that sale. With a weighting of 3.5% prior to the downgrade, the impact on the Fund amounted to approximately 1.2% in December.”

Bellamy’s has now been suspended for more than a month and as it’s highly likely that there is more bad news to come, we are certainly pleased we took decisive action in early December to cut our position entirely.

December is traditionally quiet in respect to news flow, and there wasn’t anything else in the way of stock specific news related to the Fund to report.

We took small positions in two IPOs:
Axesstoday (AXL) http://www.axsesstoday.com.au/ is a small, but growing, equipment finance business that is expecting to experience revenue and NPAT growth in FY2017 in excess of 100%. AXL ended the month up 28% on its IPO price.

GetSwift (GSW) http://www.getswift.co/ provides subscription based cloud software to small-medium sized businesses enabling them to manage their delivery networks. Given the consumer trend for products to be delivered ‘to door’ GSW appears to enjoy significant structural tailwinds. GSW ended the month up 50% on its 20c IPO price
FUND PERFORMANCE (after all fees and including distributions)

Of course we have little control over our month-to-month results. Often stocks will experience bursts of price action (that either pre-empt or lag the underlying business performance) interspersed with periods of stagnation or indeed some price retracement.

Calendar 2016 was such a year where the C3G Fund performed brilliantly in the first 3 quarters of the year and pulled back in the last quarter. Whilst we would much prefer a more measured performance outcome, much of what occurs in the short-term is simply out of our control.
Having said all that, the longer-term track record of the Fund remains outstanding. Over the past two years the C3G Fund has exceeded comparable indices by 20%+ p.a. and has achieved this with lower volatility (i.e. risk).

Despite some new stocks, the Fund still contains around 50% in cash and hence is well placed to take advantage of further price declines when we see attractive opportunities or when the present uncertainty clears.

We trust our investors had a safe and enjoyable holiday season with their family and friends. We thank you for your support and look forward to keeping you all updated with the Fund’s progress.