The Cyan C3G Fund experienced a negative month in November with a number of the Fund’s holdings contributing to the 2.5% fall. Whilst this was well behind the All Ordinaries Index, which was driven higher predominately by strong share price performances of the concentrated resources sector, some of the decline was reflected in the Smaller Industrials sector.

Certainly over longer periods, comfort can be had that the Fund has been defensively positioned such that the quarterly decline of -3.0% has been less severe than the 5.6% fall in the Small Industrials. It would also be remiss not to highlight the Fund’s one year return in excess of 20% and the return since inception above 28% p.a. 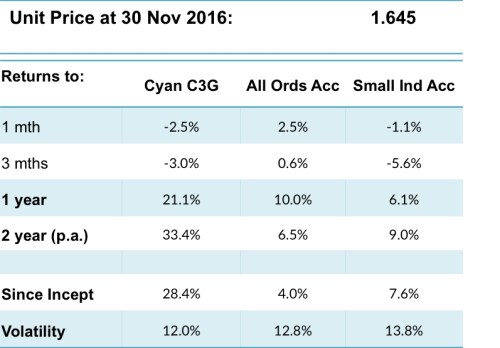 For transparency, there were a number of stock price falls to discuss that impacted the Fund’s return in the short-term.

Vita Group (VTG) that runs over 100 Telstra stores, came under significant price pressure at the end of October which continued into November. Although the company gave a vague response to an ASX ‘Price Query’ on 1st November, our research uncovered that Telstra had conducted a conference call with all their franchisees in which it had flagged changes (we suspect the removal) of what could be termed ‘store support payments’ made by Telstra to their franchisees. Whilst there has been no defined outcome or concrete quantification from VTG for what this means for the company’s earnings in the future, it would appear there has been a significant change of tack for VTG’s major business partner. Given the highly uncertain outlook, the Fund liquidated its holding early in the month and the stock has continued to decline since our selling. VTG ended the month down 30%.

In-line with investor sentiment and the rotation out of a number of industrial stocks, we unfortunately experienced some reasonable declines, albeit on no stock specific news. The main declines being Freelancer -20%, Speedcast -22%, Abundant Produce -23% and Adacel -10%.

It wasn’t all bad news, Afterpay (AFY), one of the fund’s larger holdings, held its AGM during November and indicated further growth to their already thriving payments business (AFY +15%).

BlueSky (BLA) rose 5% after reiterating full year earnings guidance at their AGM; Nick Scali (NCL) rose 8% after a positive trading update expecting a 30-35% increase in 1H NPAT over the same period last year and civil services company SRG Group (SRG), that we wrote about in Livewire during the month (www.livewiremarkets.com/wires/33863), gained 10%.

FUND PERFORMANCE (after all fees and including distributions) 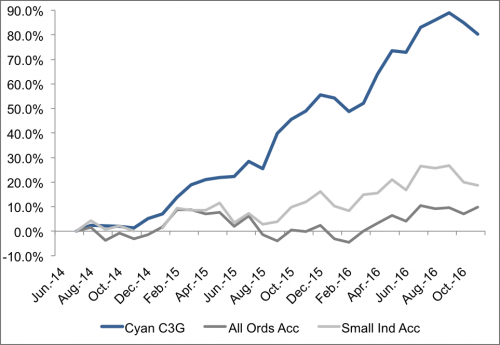 Close followers of Cyan and the stock market would likely be aware of the shock downgrade by Bellamy’s (BAL) early in December, citing lower than expected sales to China. Given the company held their AGM in late October and gave no indication of any issue, the market was understandably shocked. Cyan took immediate action and sold its holding the instant the stock began trading after the announcement. Whilst less than ideal, BAL is presently trading $2 below where we conducted that sale. With a weighting of 3.5% prior to the downgrade, the impact on the Fund amounted to approximately 1.2% in December.

Clearly stock markets are cyclical and will go through periods of rises and falls. Being long-only, the Fund will never be immune to these gyrations however we would hope (and history has shown to date) that whilst the Fund may underperform over shorter periods, on a longer-term basis it is likely to do far better than its competitors and the broader market. It is worthwhile recalling that historically the Fund has only experienced one instance where it has posted three consecutive monthly falls.

Additionally, the Fund contains around 50% in cash and hence is well placed to take advantage of further price declines when we see attractive opportunities or when the present uncertainty clears.

We thank our investor for their support and look forward to keeping you all updated with the Fund’s progress.