The Cyan C3G Fund delivered another solid result in September, rising 1.7%, in a market that rose just 0.4%, taking the Fund’s quarterly return to 9.3% (after all fees). A favourable result given the low inflation environment and scant returns being delivered by other asset classes.

During the month Dean Fergie was interviewed by Alan Kohler for his theconstantinvestor.com website. The podcast of the interview is available in our News feed.

Cyan also wrote about Skydive the Beach’s most recent acquisition on Livewire Markets (www.livewiremarkets.com). The link to the article is: here

September would typically be an uneventful month with reporting season just completed however the market was influenced by rising coal prices (with saw the Materials sector rise 5.9%) and a surprisingly benign outlook by market darling TPG Telecom (TPM) that saw that stock fall 33% and also dragged the recently merged M2 and Vocus (VOC) down 20%. We sold our inherited position in VOC post the merger determining that the strong growth attributes and scalability that M2 had enjoyed had largely been dissolved in the newly formed $3bn+ company.

Many of our existing holdings continued to perform well including PSC Group (PSI) +14%, Afterpay (AFY) +12% and Adacel (ADA) +24%. The only fall of any significance was Blue Sky (BLA) that retraced a modest 3%.

Skydive the Beach (SKB) made an outstanding acquisition in a Cairns based provider of balloon flights, rafting and other non-skydiving activities. SKB raised $20m through a rights issue and the Fund increased its holding in the company. See more about the acquisition in our article: here

We added a couple of new positions to the Fund in the month.

OTOC (OTC) is run by Managing Director, Simon Thomas, who happens to be an ex-university colleague of Dean’s. OTC has been successfully consolidating surveying businesses and we have been following the company’s progress closely over the past 18 months. More recently it has become evident that the company is making significant and sustained progress in its consolidation strategy. This has been confirmed in the strong earnings numbers the company has been releasing with underlying profitability rising 3-fold in the past financial year to over $16m.

SRG Group (SRG) – again this is another business we have been keeping a close eye on for the past year and have recently decided to make an early investment given the growing track-record of the new management under guidance of MD, David Macgeorge and chairman Peter McMorrow. SRG’s core businesses provide specialised concrete pre-tensioning and dam strengthening services. Underlying profitability in this $90m market cap company rose more than 50% in FY16 (to $9.2m pre-tax) with the company backed by a strong balance sheet including some $22m in net cash.

FUND PERFORMANCE (after all fees and including distributions) 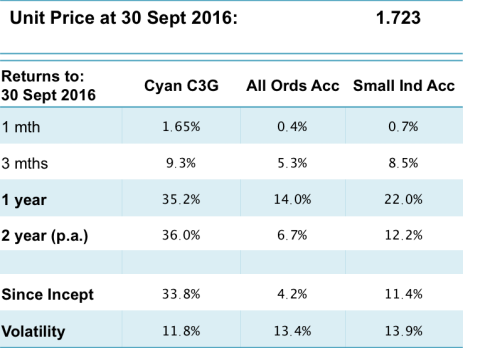 At a market-wide level, valuations have look stretched for a few months now although this must be viewed in light of record low domestic interest rates as shown.

Whilst corporate activity has slowed from the hectic levels of late 2015, we have seen a pick-up in activity more recently and have considered a number of new opportunities that have been presented to us in the past 3 weeks alone.

As we have stated previously, whilst we are always looking for exciting new investments, we also aim to protect capital by being very selective about where we invest and not over-exposing ourselves to any particular company. This is also enhanced at times by holding a level of cash to protect the downside.

The vast majority of our larger positions contain our preferred characteristics of high return on equity, strong cash conversion and below average dividend payout ratios, which positions them well to deliver ongoing earnings growth and share price appreciation.