The Cyan C3G Fund fell a modest 0.8% in January. We believe this was an impressive outcome given the broader market fall of 5.4% and taking into account the 48.0% the Fund gained in 2015.

As you would likely be aware, it was a torrid start to 2016 with the All Ords falling over 8% before recovering somewhat, to end the month down a shaky 5.4%. As we write this, the bearish tone continues with the ASX200 down a further 5% to the 11th Feb with the market officially in a bear market – the definition being a fall of 20% or more from its most recent high (in April 2015).

Fortunately the defensive tilt we implemented for the C3G Fund circumvented most of the broader market losses. Although we clearly do not like to lose money in any month, the nature of any stock market investment dictates that occasional losses will be experienced in the chase for excess returns. Again volatility for the Fund (especially in down markets) is tracking far below comparable market indices. (See below chart)

The poorest performer in the month was jewellery retailer Lovisa (LOV) down 38%. A profit warning citing currency impacts (most of Lovisa’s product is sourced in USD) and heavy discounting saw the market scrub the shine well off the share price. A significant management sell-down in September 2015 did not do the stock any favours either. Despite this, the stock continues to trade above its $2 IPO price and the impact on the Fund was negligible given we had locked-in (sold) much of our holding in 2015.

We also experienced some weakness in BlueSky (BLA) which pulled back 17% in January. Financial services businesses are traditionally highly leveraged to market swings and again, like Lovisa, we had lightened our position in 2015 and hence the impact on the Fund was minimal.

We saw a few Fund positions buck the negative trend in January. Skydive the Beach (SKB) gained 22%; M2 Telecommunications (M2) was up 10% as its merger with Vocus (VOC) was approved and Speedcast (SDA) put on 13% after a well received investor roadshow.

Monthly Fund Performance (after all fees) 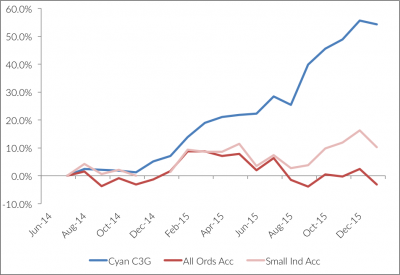 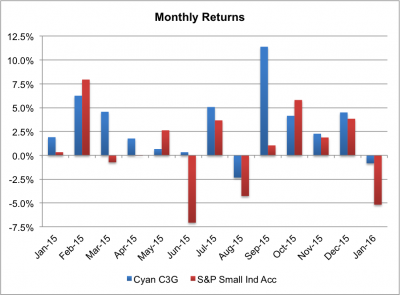 It is clearly an extremely challenging market in which to invest presently.

As we wrote last month:

1. To position for potential market weakness.

2. We believe a number of company specific valuations remain stretched, and;

3. To have the investment firepower to take advantage of opportunities as we identify them.”

Our conservative positioning (meaning a higher than usual cash weighting) remains in place which has been an invaluable decision to date.

Not only has it buffered the Fund against recent market falls; it currently provides us with the enviable opportunity to make investments when share prices are depressed.

Of course this is not an exact science and we have been investing long enough to know that it is impossible to ‘pick the bottom’. However we are keeping a close eye on many investment opportunities that we have found attractive as investments, but had previously considered too expensive.

As prices decline we expect to see the Fund making considered investment decisions and setting the Fund up for what we expect to be another good year.